In 2014, the Ruger 10/22 rifle turned 50, but despite the passing of over five decades, this gun remains the most popular .22 rifle ever. Loved by millions for its affordability, accuracy, quality and reliability, the 10/22 is considered the ultimate rimfire gun.

If you’ve never had a 10/22, you need to try one out immediately! It’s great for novices or veterans and comes with a huge industry of aftermarket parts for customizing the gun to fit your requirements. The name combines the original magazine capacity (10 rounds) and the .22 caliber.

The Ruger company started out as Sturm, Ruger & Co, Inc in 1949 in a small rented shop in Southport, Connecticut. The company has been publicly traded since 1969 and listed on the New York Stock Exchange in 1990.

Before starting his own company, Bill Ruger developed new weapons for the U.S Army. After the formation of the company, Sturm & Ruger Co. produced its first semi-automatic .22 rimfire pistol – the Mk I, generally known as the Ruger Standard, which became so successful that it launched the entire company.

Before the 10/22, the .22 rifle was considered ‘a kid’s gun’. Bill Ruger wanted to design a .22 rifle that would be taken seriously by adult professional shooters. Along with Henry Sefried, Bill started working on a new .22 rifle that would look like the Ruger Model 44 and act as its rimfire counterpart. While the Model .44 was a gas-operated rifle, the 10/22 used simple blowback operations with the receiver fashioned of aluminum. Bill Ruger incorporated the rotary magazine design of the Savage 99 into the 10/22, which made the rifle easy to carry and operate.

The rifle was introduced in 1964 with an affordable price tag of just $54.50, which made it even more popular. It was more accurate and had a higher quality than any of the competition with similar prices.

Over 50 Years As One of America’s Favorite Long Guns

Over seven million Ruger 10/22 rifles have been sold since the original came out in 1964. If each Ruger 10/22 owner has fired only one brick of ammunition (500 rounds), it means that a minimum of 3.5 billion rounds have been fired. The Ruger 10/22 raised the bar for .22 rifles of all types, elevating it from a kid’s gun to a serious hunting and sports rifle.

Due to its exceptionally simple design – unlike most other .22 rifles – there is no box magazine to get in the way of shooting offhand or from a rested position. The rotary magazine is easy to load, and reliable. It does away with the additional bulk and weight of a conventional magazine tube under the barrel found in most rifles.

Smooth underneath, the 10/22 manages to keep things out of the way while shooting and carrying. The assembly and disassembly of the gun is easy and even the trigger assembly can be disassembled for cleaning.

Additionally, the Ruger 10/22 product line is versatile and 11 models and 7 basic configurations have been introduced over the years, ensuring that there’s a model for everyone.

The Ruger 10/22 Rifle is a great choice if you’re interested in adapting and modifying the gun for any purpose. The barrel is mounted using an ingenious v-block system and slips right into the receiver. Rather than rely on threads that need to be timed for perfect headspace adjustment, a v-block, and two screws connect the receiver and a dovetail cut in the barrel itself. The average person can easily replace any part of the gun with nothing more than a screwdriver, a hex key and simple punches.

The 10/22 is reliable enough that you can shoot 300 shots down the range without any cleaning. This is the best performance for any semi-automatic rimfire rifle in its class.

Due to its popularity, companies offer many aftermarket modifications to improve performance, augment the rifle’s looks, or increase its magazine capacity. Upgrades like the bolt assembly, trigger housing, larger magazines, folding stock and Picatinny rail have made this rifle even more accurate and desirable. The 10/22’s aftermarket is now so prolific that a 10/22 can be built with completely non-Ruger-made components.

Today, Ruger offers the 10/22 in a number of configurations, including Carbine, Compact, Sporter, Tactical, Takedown, and Target models. Over its lifetime, it’s been offered in others, too. Here’s a quick overview of the models currently available.

This is the standard model. It has an 18.5″ barrel, comes in hardwood or black synthetic stocks, black alloy or stainless steel receivers. A version of this model comes fitted with LaserMax laser sight.

This model disassembles into barrel and action/buttstock components easily for carrying in a backpack. The standard Takedown model has a brushed aluminum receiver which resembles stainless steel and an 18.5″ barrel with a black synthetic stock.

It’s also offered in a black alloy receiver with a 16.12″ threaded barrel with a flash suppressor or with a threaded, fluted target barrel.

The Target shooting model comes with a heavy 20″ bull barrel with no iron sights, and weighs around 7.5 pounds.

The Compact rifle has a 16.12″ barrel and an overall length of 34 inches. It weighs a comfortable 4.5 pounds and is fitted with fiber-optic sights rather than the diamond rear and gold bead front. It’s available with a hardwood stock.

This model has an 18.5″, alternatively 20″ or 22″, barrel and checkered walnut stock with sling swivels. It weighs 5.75 pounds, so is a bit heavier than the Carbine.

The Ruger 10/22 is a fine gun for any shooter, whether a novice who’s just starting out or an experienced marksman. Not only does it come in several variants that can be used for hunting, marksmanship or sport, but the huge aftermarket modification market will allow owners to customize the rifle to their own requirements.

This American legend has been around for 53 years and is on track to complete a century with its current popularity. As new generations of shooters are introduced to this beloved icon, the future of the 10/22 seems bright.

Josh Lewis is a aficionado of all things to do with firearms, but especially rifles. He’s been blogging and offering his unsolicited opinion on them for a couple years now on his website, Gunmann.com. Be sure to visit and also follow him on Facebook.

The Glock g17 is the first in a long line of Glocks coming in with all kinds of calibers.  The Glock G17 is really Simple. The Glock G17 has just 34 Component parts. That is an Amazing piece of engineering. 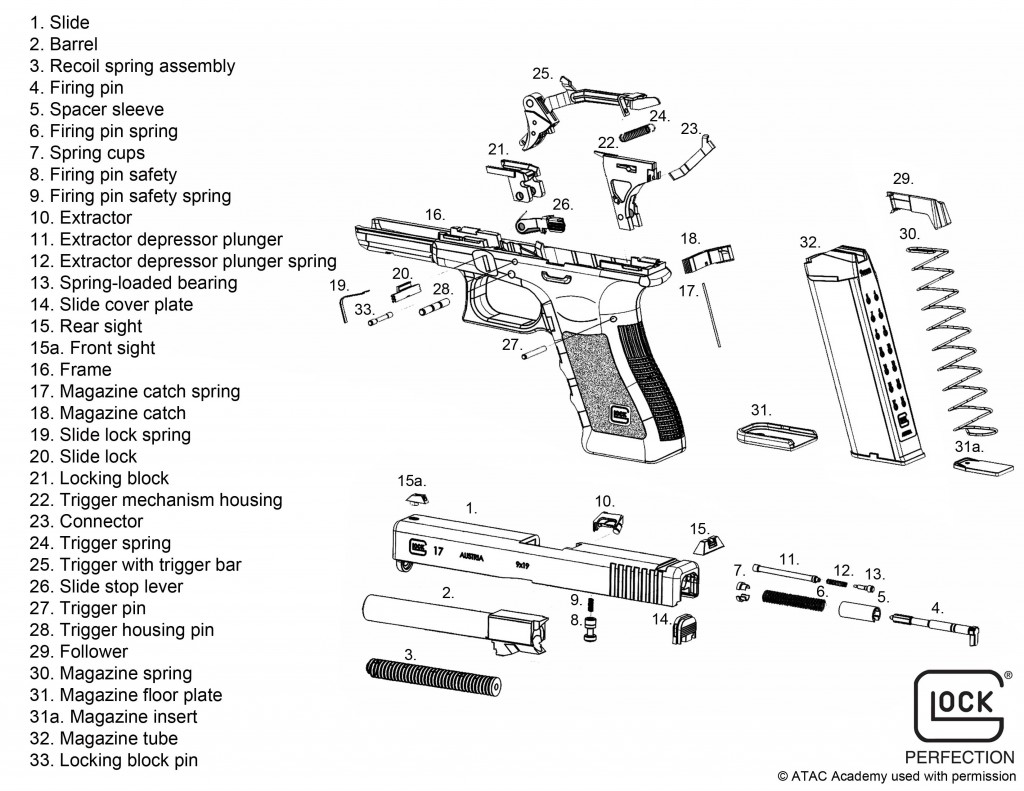 The Glock G17 is Safe. yes it is safe. Glock have been tested. Glocks have parts to be drop safe. This author saw some testing in person. By testings, I should say the guy dropped it TWICE! The gun was fully loaded. The Glock really is a safe gun. It has three safety’s. A trigger safety.(some don’t care for this and say, “it gets in the way.”) It has a Drop safety and a Firing pin safety. Some people prefer for there to be a manual or traditional safety. Their reasoning behind it is kind of foolish. If the gun is on safe then it is safe, and nothing bad can happen? Wrong! That is wrong mindset and the wrong way of thinking. The Four Rules of Gun Safety must be followed at all time. If you follow the rules you do not need a manual safety.(if you disagree comment why)

The Glock is indeed a great gun. The Glock started the polymer revolution in handguns.(it was not first, but it was the gun that changed the market) Polymer works! It is light weight and polymer cost less to produce. Torture Test, after torture test to be proven to work and be reliable. 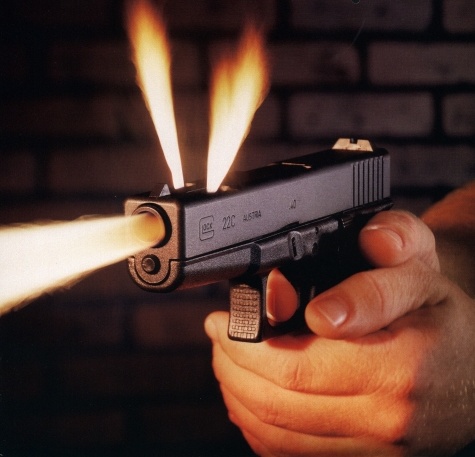 The picture at the top had the text on it “C what you have been missing”  This Author Thought it was a cool Glock ad.

The Glock G19 is one of the most popular Glock, many pick the G19 for concealed carry. There are thinner guns that are good for a carry choice. When things are popular that means that they do work. The Glock G19 works. The question you have to ask yourself is will it work for you? Being popular is not a bad thing. Popularity comes from being good at what you do. Don’t be different just to be different be different when it is better. Glock Claims it is the world’s most popular pistol.

This is an Ad below to keep the servers on. Thanks if you turn off your ad blocker ext. Have a great day. Ad break over

Gen3 is the older wiser and has been around longer and is very proven. Gen4 have had some issues. Gen3 is cheaper. If you want to change the grip size or have a reversible magazine release then Gen4 maybe better for you. Gen4 has a larger magazine release. Gen3 magazine release seems fine. Gen4 has a dual recoil Spring, some of the reliability issues came from the spring. So is it a feature or a negative? You decide if you really need reduced felt recoil. Glock Claims is increase the life of the spring. New springs for gen3 factory springs are only $10.  If you really must shot with your left hand and you are left eye dominate there are better options. Older than gen3 has no rail and no chamber indicator. Also the older gen Glocks are even cheaper. Having a rail may be worth the extra money. The chamber indicator is on the extractor where as many other manufactures add more parts.

Update: The Gen 5 does not have finger groves like the Gen1/2. It has a “better Trigger, smooth edges. still a bigger fan of the old Gen 3.

Glock has claimed that more than 65% law enforcement agencies pick Glock. That is impressive. If you are buying a gun you can’t go wrong with Glock. There are many other great guns out there. But Glock is hard to beat for the price and what you get. A Glock is never a bad choice. Many first time buyers pick Glock. There are a lot big fan of Glock. Glocks are simple being there are only 34 parts, good price, and reliable. Better guns are out there not at a better price.

Create/have an Account/ be Signed In
Have good Karma <- coming soon Be Truthful and Honest Provide as much detail as possible Helpful Thoughts for Details on posts 1. What gun is it? 2. Who is the Maker/ Country of Origin? 3. What Caliber is the Gun? 4. What Ammunition do you use? 5. How long have you had the Gun? 6. What is the POU? 7. What is your level of experience?